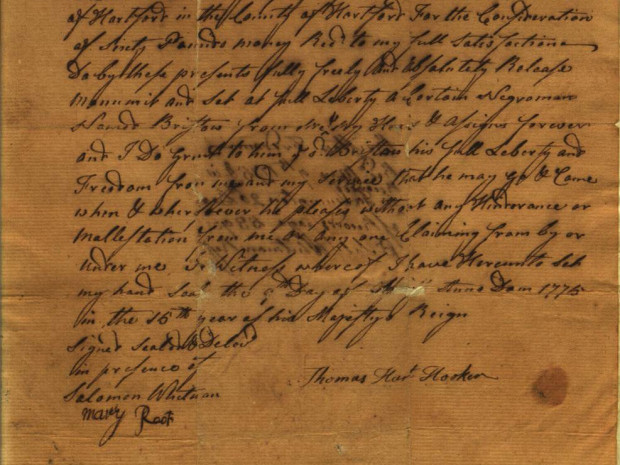 Explore the Life of Bristow, 2 part series. March 7 and March 14.

Bristow, sometimes spelled Bristol, was a resident of the West Division of Hartford (now West Hartford) in the mid to late 1700s. Regarded for his agricultural knowledge, he was enslaved by the Thomas Hart and Sarah Whitman Hooker family until 1755. Hooker family lore maintained that he was granted his freedom, but his manumission papers show that he purchased his freedom from Thomas Hart Hooker. Bristow lived with his former enslaver, Sarah Whitman Hooker, in his later life and rests in Old Center Cemetery on North Main Street, West Hartford. Since the naming of Bristow Middle School in 2004, research has uncovered even more information about Bristow’s life including his military service during the French and Indian Wars where he shows up on muster rolls from 1755-1761.

In March the public is invited to explore Bristow’s life in a two-part discussion series at the Noah Webster House. Find out new information about Bristow and discuss how historians use primary source documents to make inferences about the past. This discussion series will be led by dedicated researchers Dr. Tracey Wilson, Elizabeth Devine, and Denise deMello who have uncovered the history and lives of over 90 individuals enslaved in West Hartford during the colonial era. More discussion than lecture, you will be the researcher and student exploring primary source documents and how to interpret and extrapolate information. Participants will have the opportunity to interpret documents from the 1700’s such as military muster rolls, account books, and wills.  Attendees will discuss issues of inclusion, equity, and diversity both throughout history and today.

You may attend one or both evenings. The first evening will focus on Bristow and his life as an enslaved man and the second with focus on Bristow as a free man. The event is open to the public. A small fee of $10 is requested of individuals who are not members of the museum. Advance registration is required.