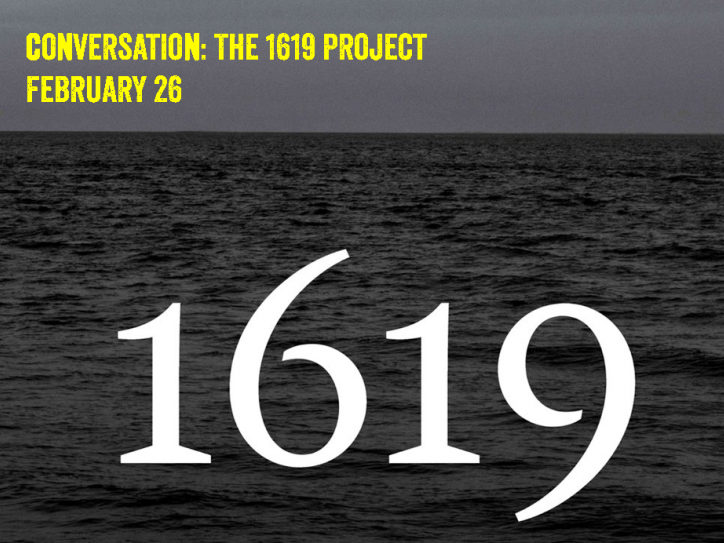 *Due to an overwhelming response, this program has been moved to the Foisie Family Amphitheater
at Watkinson School, 180 Bloomfield Ave., Hartford, CT 06105, to accommodate more people. The program will also be taped for later airing by West Hartford Community Interactive.*

Join the West Hartford African American Social & Cultural Organization and the Noah Webster House & West Hartford Historical Society on Wednesday, February 26 for a conversation about The 1619 Project. Dr. Benjamin Foster, Jr., a scholar on the African American experience, education reform, and cross-cultural dynamics commentary, will review elements of The 1619 Project and share some of the feedback it has received, including both praise and criticism. A panel discussion with historians including Dr. Foster, Dr. Shayla Nunnally, Professor of Political Science at the University of Connecticut, Dr. Bryan Sinche, Professor of English and Chair of the Department of English and Modern Languages at the University of Hartford, and Dr. Tracey Wilson, West Hartford Town Historian, will discuss the project further, before opening up the conversation to the audience.

What's The 1619 Project? In August 2019, The New York Times Magazine released a special issue called The 1619 Project. Published on the 400th anniversary of the first arrival of Africans on American soil, The 1619 Project  is a historical analysis of how slavery shaped American political, social, and economic institutions. Spearheaded by journalist Nikole Hannah-Jones, The 1619 Project challenges Americans to reframe U.S. history by marking the year when the first enslaved Africans arrived on Virginia soil as our nation's foundational date and placing “the consequences of slavery and the contributions of black Americans at the very center of our national narrative.”

Since its publication, the facts purported in The 1619 Project and, indeed, its central purpose, has been strongly debated. In December 2019, a group of American historians published a letter criticizing the Project, applauding Hannah-Jones’ attempt to unearth the central element of slavery and racism in American history, but objecting to its cynicism and “displacement of historical understanding by ideology.”

*This event has changed locations. Due to an overwhelming response, this program has been moved to the Foisie Family Amphitheater at Watkinson School, 180 Bloomfield Ave., Hartford, CT 06105, to accommodate more people.The program will also be taped for later airing by West Hartford Community Interactive.*

Join us at Watkinson School, 180 Bloomfield Ave., Hartford, CT, on Wednesday, February 26, 2020 for a conversation about this controversial project. Meet and greet with refreshments begins at 5:30 p.m.; program begins at 6:00 p.m. Free and open to the public. Space is limited, register in advance to save your seat.